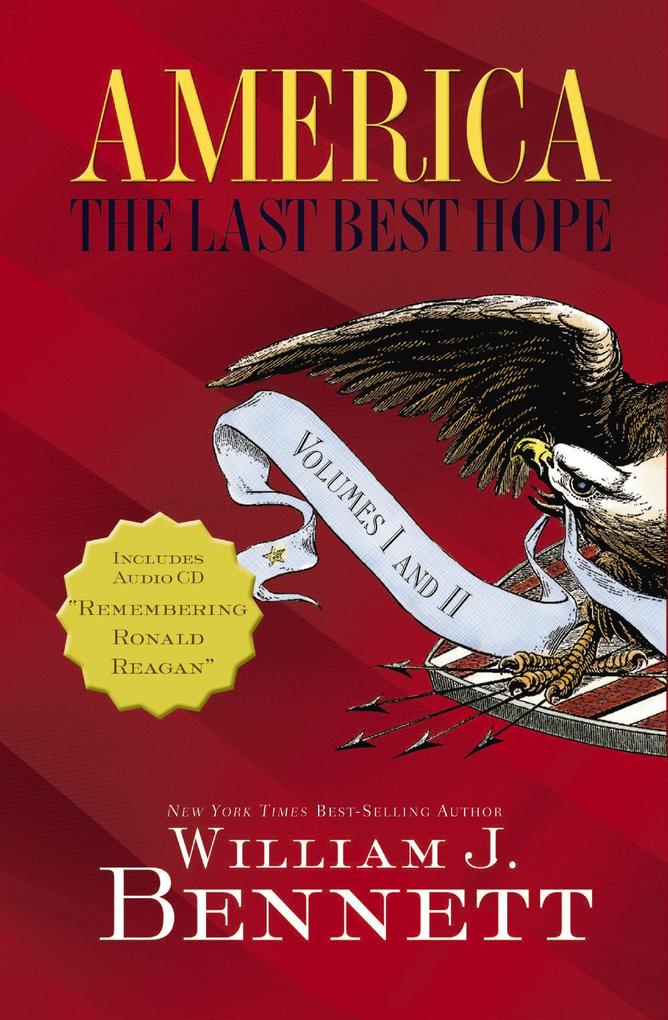 America: The Last Best Hope Volumes I and II

While national test scores reveal that American students know startlingly little about their history, former U.S. Education Secretary William J. Bennett offers one of the most gripping and memorable versions of the American story in print. The two volumes of Bennett's New York Times bestselling epic, America: The Last Best Hope, cover Columbus's discovery of the New World in the fifteenth century to the fall of world communism in the twentieth. Now both volumes are available in a convenient and attractive slip case-complete with a bonus audio CD, "Remembering Ronald Reagan," featuring recollections and commentary by Jeane Kirkpatrick, Edwin Meese, and others.

Bill Bennett brings American history to life with stories such as:

From heroism of the Revolution to the dire hours of the Civil War, from the progressive reforms of the early 1900s to the civil rights reforms of the 1960s, from the high drama of the Space Race to the gut-wrenching tension of the Cold War, Bennett slices through the cobwebs of time, memory, and prevailing cynicism to reinvigorate America with an informed patriotism.

"This is the American history that Abraham Lincoln has long awaited."
-Harry V. Jaffa, Crisis of the House Divided

"Bennett has a gift for choosing the pithy, revealing anecdote and for providing fresh character sketches and critical analyses of the leading figures. This is an American history that adults will find refreshing and enlightening and that younger readers will find a darn good read."
-Michael Barone, US News & World Report

"A worthy and necessary book for our time."
-Michael J. Lewis, Commentary

"Bennett ... has a strong sense of narrative, a flair for anecdote and a lively style. And the American story really is a remarkable one, filled with its share of brilliant leaders and tragic mistakes. Bennett brings that story to life."
-Alan Wolfe, The Washington Post

"The role of history is to inform, inspire, and sometimes provoke us, which is why Bill Bennett's wonderfully readable book is so important. He puts our nation's triumphs, along with its lapses, into the context of a narrative about the progress of freedom. Every now and then it's useful to be reminded that we are a fortunate people, blessed with generations of leaders who repeatedly renewed the meaning of America."
-Walter Isaacson, Benjamin Franklin: An American Life

"The importance of America: The Last Best Hope probably exceeds anything Dr. Bennett has ever written, and it is more elegantly crafted and eminently readable than any comprehensive work of history I've read in a very long time. It's silly to compare great works of history to great novels, but this book truly is a page-turner."
-Brad Miner, American Compass

"This lively book acknowledges mistakes and shortcomings, yet patriotically asserts that the American experiment in democracy is still a success story."
-School Library Journal