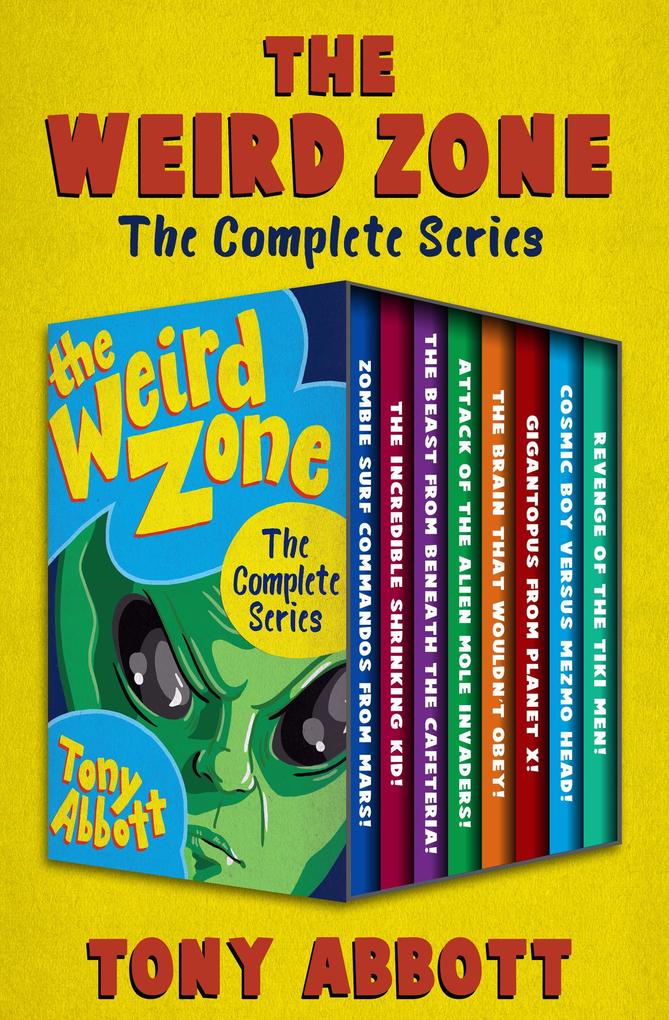 Think your town is weird? Step into Grover's Mill-known to the local kids as the "Weird Zone"-from the award-winning author of the Secrets of Droon series.

There's no place like home. Seriously, there's no place like the bizarre town of Grover's Mill, home to friends Liz, Holly, Sean, Jeff, and Mike-but also to aliens, monsters, dinosaurs, giant robots, and a potato capable of mind control. It could have something to do with the location-in the middle of a triangle containing a secret UFO testing base, a dinosaur burial ground, and a cheesy horror movie studio. Whatever the reason, enter at your own risk . . .

Zombie Surf Commandos from Mars!: When disgusting alien zombies start rising from the lake, Holly, Liz, and Jeff must escape-or their brains will become an afternoon snack.

The Incredible Shrinking Kid!: After a blast of purple light zaps Holly's brother, Sean-shrinking him to four inches-the friends need to make sure he doesn't end up in an evil toy-store owner's collection.

The Beast from Beneath the Cafeteria!: Liz and her friends battle a dinosaur with a craving for junk food-and an appetite for destruction.

Attack of the Alien Mole Invaders!: Not to make a mountain out of a molehill-but a colony of giant moles from outer space has tunneled under Grover's Mill. With the help of a secret government invention, Jeff and Holly must stop them in their tracks.

The Brain That Wouldn't Obey!: Mike is sure he's going to win the school science fair with his potato-powered radio, "Potadio." But when his invention is electrocuted to life and takes over the minds of the teachers and students, it's boy vs. spud.

Gigantopus from Planet X!: When Sean and Holly must battle a gigantic robot octopus controlled by an evil alien, it sucks big-time.

Cosmic Boy Versus Mezmo Head!: After an alien blasts Jeff with an X-ray on his way to audition for his school's outer space version of The Wizard of Oz, his favorite childhood toy, a Cosmic Boy space helmet, gets stuck on his head. The space invader has his own mind-controlling Mezmo head helmet, and now the two will butt heads . . . or, uh, helmets.

Revenge of the Tiki Men!: There's no time to lounge around-huge Tiki heads with a grudge against Grover's Mill are turning the town back into a jungle. It's up to the kids to fend off a total disaster.

Over the last two decades, Tony Abbott has written dozens of mysteries, comics, and adventure books for young readers aged six to fourteen, with series including Danger Guys, the Time Surfers, the Weird Zone, Underworlds, Goofballs, and the long-running fantasy series the Secrets of Droon. He is also the author of the fantasy epic Kringle and the realistic novels Firegirl (winner of the 2006 Golden Kite Award for Fiction), The Postcard (winner of the 2008 Edgar Award for Best Juvenile Mystery), and Lunch-Box Dream. Among his latest novels is The Forbidden Stone, the first installment of the twelve-book saga the Copernicus Legacy. Tony has taught on the faculty of Lesley University's MFA program in creative writing, is a frequent conference speaker and visitor to schools, and presents workshops to creative writers of all ages. His websites include www.tonyabbottbooks.com, www.thecopernicuslegacy.com, and the literary blog www.fridaybookreport.com.