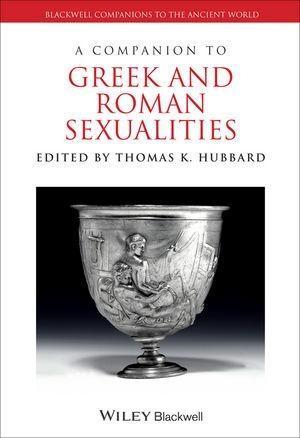 A Companion to Greek and Roman Sexualities

Titel: A Companion to Greek and Roman Sexualities

A Companion to Greek and Roman Sexualities presents a comprehensive collection of original essays relating to aspects of gender and sexuality in the classical world. Views the various practices and discursive contexts of sexuality systematically and holistically Discusses Greece and Rome in each chapter, with sensitivity to the continuities and differences between the two classical civilizations Addresses the classical influence on the understanding of later ages and religion Covers artistic and literary genres, various social environments of sexual conduct, and the technical disciplines of medicine, magic, physiognomy, and dream interpretation Features contributions from more than 40 top international scholars

Alastair J. L. Blanshard is Senior Lecturer at the University of Sydney. He has published a number of articles and chapters on the impact of the classical world on modern sexuality. His most recent book is Sex: Vice and Love from Antiquity to Modernity (Wiley-Blackwell 2010).
Sandra Boehringer holds the position of Maîtresse de Conférences in Greek History at the University of Strasbourg, and is the author of articles on ancient sexuality and culture and of the following books: L'Homosexualité féminine dans l'antiquité grecque et romaine (2007); and Dika, élève de Sappho, Lesbos, 600 av. J.-C. (1999). She is co-editor of Homosexualité: Aimer en Grèce et à Rome (2010; with Louis-Georges Tin) and Hommes et femmes dans l'Antiquité: Le genre, méthode et documents (2011; with Violaine Sebillotte Cuchet). She has co-translated into French (with Nadine Picard) John J. Winkler's Constraints of Desire (2005) and Maud Gleason's Making Men (2013).
Christophe Chandezon is Professor of Ancient History at the University of Montpellier. He is the author of articles and books about Greek rural society and economics (L'Élevage en Grèce (fin Ve-fin Ier s. a.C.): L'apport des sources épigraphiques, 2003). With Julien du Bouchet, he founded an international team about Artemidorus and ancient dream interpretation in 2007. The aim is to produce a new French translation with notes of Artemidorus' Dreambook.
John R. Clarke is Annie Laurie Howard Regents Professor at the University of Texas at Austin. He is the author of seven books, most recently Looking at Laughter: Humor, Power, and Transgression in Roman Visual Culture, 100 bc–ad 250 (2007) and Roman Life: 100 bc–ad 200 (2007). He directs the
Oplontis Project (www.oplontisproject.org), a multidisciplinary study of Villa A (“of Poppaea”) at Torre Annunziata, Italy.
Edward E. Cohen is Professor of Ancient History and Classical Studies (adjunct) at the University of Pennsylvania. He has been chairman of the board of several banks and bank-holding companies and currently serves as chief executive officer of Atlas Energy, L.P., a major US producer and processor of natural gas. Among his books are The Athenian Nation (2000) and Athenian Economy and Society: A Banking Perspective (1992). He was co-editor of Money, Labour and Land: Approaches to the Economies of Ancient Greece (2002).
Sean Corner is Associate Professor in Greek History at McMaster University. His research concerns the political culture and society of archaic and classical Greece. He has published a number of articles exploring the sumposion and its relationship to the polis, and he is currently completing a book on the subject.
Monica S. Cyrino is Professor of Classics at the University of New Mexico. Her research focuses on the intersection of the ancient world and popular culture. She is the author of Big Screen Rome (2005) and Aphrodite (2010) and the editor of Rome, Season One: History Makes Television (2008) and Screening Love and Sex in the Ancient World (2013). She has published essays on the representation of antiquity in films such as Gladiator, Troy, Alexander, 300, and Black Orpheus.
Mary R. D'Angelo is Associate Professor of New Testament and Christian Origins in the Theology Department and in the Gender Studies Program at the University of Notre Dame. She lectures and publishes on interpretation of scripture, women in the early Christian texts, gender and sexual politics in the interactions between ancient Jews and Christians and the early Roman Empire.

Véronique Dasen is Associate Professor of Classical Archaeology at the University of Fribourg (Switzerland). She works on the history of the body, ancient medicine, and gender studies. She is the author of Dwarfs in Ancient Egypt and Greece (1993), Jumeaux, jumelles dans l'antiquité grecque et romaine (2005), and La Médecine dans l'antiquité grecque et romaine, with Helen King (2008). Among other books, she edited and contributed to Langages et métaphores du corps with Jérôme Wilgaux (2008). She is currently working with Christian Zubler on the treatises on body divination attributed to Melampous (edition, translation, and commentary).
Maria Doerfler is Assistant Professor of the History of Christianity in Late Antiquity at Duke University. Her work has appeared in the Journal of Early Christian Studies, Church History, Le Muséon, and other venues. Current research interests include issues of gender and sexuality in late antiquity, infant mortality and responses thereto across the Roman and Sasanid Empires, as well as the development of judicial ideals and practices in early monastic settings.
Radcliffe G. Edmonds III is Professor of Greek, Latin, and Classical Studies at Bryn Mawr College. His research interests include mythology, religion, and Platonic philosophy, especially the marginal categories of magic and Orphism within Greek religion. His Redefining Ancient Orphism: A Study in Greek Religion is forthcoming, and he is beginning work on Drawing Down the Moon: Magic in the Ancient Greco-Roman World.
Nick Fisher is Professor Emeritus of Ancient History at Cardiff University. He has published Aeschines, Against Timarchos (2001), Slavery in Classical Greece (1993), HYBRIS: A Study in the Values of Honour and Shame in Ancient Greece (1992), and many articl
es on the political, social, and cultural history of ancient Greece.
Monica Florence is Assistant Professor of Classical Studies at the College of Wooster. She has published on the representation of gender in the myth of Hermaphroditus as well as on ethnic identities in the Old Comedy, and she is currently working on Mistaken Identity, a study of ethnicity in Martial's epigrams.
Kathy L. Gaca is Associate Professor of Classics at Vanderbilt University. She is the author of The Making of Fornication: Eros, Ethics, and Political Reform in Greek Philosophy and Early Christianity (2003) and of numerous articles and reviews (for which see http://www.vanderbilt.edu/classics/kathygaca). She is currently at work on her second book, Sexual Warfare against Girls and Women from Antiquity to Modernity. Her research explores how problematic sexual norms rooted in classical antiquity inform current concerns of social injustice.
Allison Glazebrook is Associate Professor of Classics at Brock University. Her research focuses on women, gender, and sexuality in ancient Greece. She has published in such journals as Arethusa, Mouseion, DIKE, and Classical World. She is co-editor with Madeleine M. Henry of Greek Prostitutes in the Ancient Mediterranean, 800 bce–200 ce (2011).
Owen Hodkinson is Lecturer in Classics at the University of Leeds. He specialises in ancient epistolography and fiction. He is co-editor of Epistolary Narratives in Ancient Greek Literature (2013) with Patricia Rosenmeyer and Evelien Bracke, and author of a forthcoming monograph, Metafiction in Classical Literature: The Invention of Self-Conscious Fiction.
Ingrid E. Holmberg is Associate Professor of Greek and Roman Studies at the University of Victoria. Her research interests are the Homeric epic, the epic cycle, and sex and gender in ancient Gr
eece. She has published on these topics in AJP, TAPA, Helios, Arethusa, Phoenix, and Oral Tradition.
Thomas K. Hubbard currently holds the Mary Helen Thompson Centennial Professorship in the Humanities at the University of Texas, Austin. He writes extensively on Greek and Roman literature and sexuality. In addition to books on Pindar, Aristophanes, and the bucolic tradition in European poetry, he has edited Greek Love Reconsidered (2000) and Homosexuality in Greece and Rome: A Sourcebook of Basic Documents (2003). His current research examines the human rights of sexual minorities.
James Jope is an independent scholar. After teaching classics for several years, he became a multilingual translator for the Canadian government. He is now retired and occasionally teaches pro bono. He has published articles on Lucretius and Epicureanism, ancient sexuality, Strato, Lucian, Aristotle, and botanical Latin, as well as on Latin American idioms and translation. His website is www.jamesjope.ca.
Michael Matthew Kaylor is Associate Professor of English at Masaryk University in Brno, Czech Republic. His works include Secreted Desires: The Major Uranians: Hopkins, Pater and Wilde, the two-volume Lad's Love: An Anthology of Uranian Poetry and Prose, and scholarly editions of Edward Perry Warren's Defence of Uranian Love, Forrest Reid's Tom Barber Trilogy, and John Stuart Hay's Amazing Emperor Heliogabalus.
Catherine C. Keane is Associate Professor of Classics at Washington University in St. Louis. She is the author of Figuring Genre in Roman Satire (2006), A Roman Verse Satire Reader (2010), articles on ancient satire, and a book in...