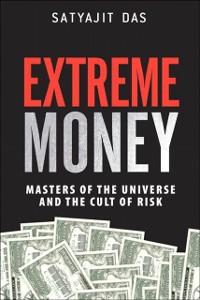 Masters of the Universe and the Cult of Risk.
von Satyajit Das

The human race created money and finance: then, our inventions recreated us. In Extreme Money, best-selling author and global finance expert Satyajit Das tells how this happened and what it means. Das reveals the spectacular, dangerous money games that are generating increasingly massive bubbles of fake growth, prosperity, and wealth--while endangering the jobs, possessions, and futures of virtually everyone outside finance.

"...virtually in a category of its own - part history, part book of financial quotations, part cautionary tale, part textbook. It contains some of the clearest charts about risk transfer you will find anywhere. ...Others have laid out the dire consequences of financialisation ("the conversion of everything into monetary form", in Das's phrase), but few have done it with a wider or more entertaining range of references...[Extreme Money] does... reach an important, if worrying, conclusion: financialisation may be too deep-rooted to be torn out. As Das puts it - characteristically borrowing a line from a movie, Inception - "the hardest virus to kill is an idea".
-Andrew Hill "Eclectic Guide to the Excesses of the Crisis" Financial Times (August 17, 2011)

Extreme Money named to the longlist for the 2011 FT and Goldman Sachs Business Book of the Year award.

Satyajit Das is an international specialist in the area of financial derivatives, risk management, and capital markets, with a global reputation.

Das presciently anticipated many aspects of the Global Financial Crisis in his 2006 book Traders, Guns & Money: Knowns and Unknowns in the Dazzling World of Derivatives. In a speech that year-"The Coming Credit Crash"-he argued that: "an informed analysis of the structured credit markets shows that risk is not better spread but more leveraged and (arguably) more concentrated amongst hedge funds and a small group of dealers. This does not improve the overall stability and security of the financial system but exposes it to increased risk of a 'crash' during a credit downturn." He has continued to be a respected commentator on subsequent developments in the crisis.

He was featured in Charles Ferguson's 2010 Oscar-winning documentary Inside Job and a 2009 BBC TV documentary Tricks with Risk. He has appeared on TV and radio-ABC and SBS (Australia); BBC (UK); Bloomberg (USA); CNBC (UK and Asia); SABC, Summit TV and e-TV (South Africa); Canadian Broadcasting and Business New Network (Canada); and NZ Radio. He is a frequent interviewee and widely quoted in the financial press in the United States, Canada, UK/ Europe, South Africa, Australia, New Zealand, and Asia.

Between 1988 and 1994, Das was the Treasurer of the TNT Group, an international transport and logistics company with responsibility for the Global Treasury function. Between 1977 and 1987, he worked in banking with the Commonwealth Bank of Australia, Citicorp Investment Bank, and Merrill Lynch.

Since 1994, Das has acted as a consultant to financial institutions and corporations in Europe, North America, Asia, and Australia. He provides advice on trading, pricing/valuation, and risk management of derivative transactions/financial products. He also presents advanced seminars on financial derivatives/ risk management and capital markets for derivatives and finance professionals throughout the world. Between 2000 and 2007, he was a consultant to and Director of Rand Merchant Bank, a division of First Rand Group of South Africa.

He is the author of Traders, Guns & Money: Knowns and Unknowns in the Dazzling World of Derivatives-Revised Edition (2006 and 2010), an insider's account of derivatives trading and the financial products business filled with black humor and satire. The book has been described by the Financial Times, London as "fascinating reading...explaining not only the high-minded theory behind the business and its various products but the sometimes sordid reality of the industry." James Pressley at Bloomberg included the revised edition of the book in his list of 50 top business titles published since January 1, 2009.

He has published widely on financial issues in professional journals and newspapers.

Das is also the author (with Jade Novakovic) of In Search of the Pangolin: The Accidental Eco-Tourist (2006, New Holland), a travel narrative on eco-tourism.