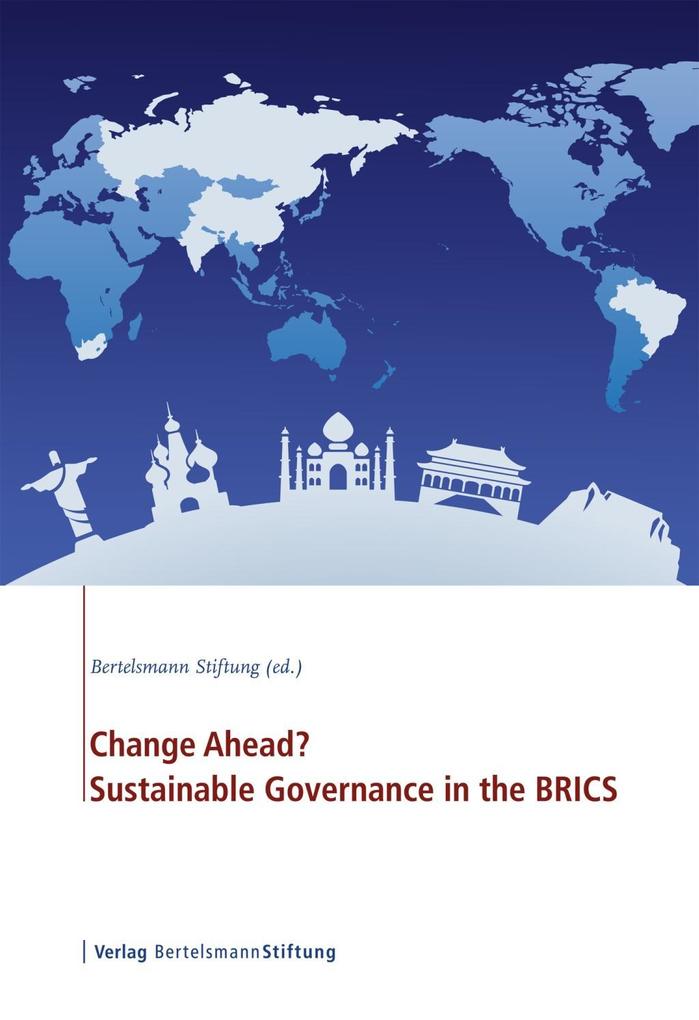 Change Ahead? Sustainable Governance in the BRICS

Titel: Change Ahead? Sustainable Governance in the BRICS

The emergent powers of Brazil, Russia, India, China and South Africa (BRICS) are drawing attention as they change the political and economic map of the 21st century. But does each country have the institutional framework needed to advance its path of development and to effectively address needed reforms with sustainable solutions? With the support of an international network of experts, the Bertelsmann Stiftung has conducted an indicator-based inventory of the state and performance of governance in each BRICS country. Focusing on success factors and policy challenges, this study draws upon the analytic tool of the Sustainable Governance Indicators (SGI), allowing for a cross-national analysis of the need for reform in core policy areas such as economic and social affairs, environmental policies and innovation strategies. At the same time, the capacities of each country's system of governance are explored in each BRICS state. explores the the extent to which problems are identified and strategic solutions implemented in each of the five political systems. By looking at both reform needs and reform capacities, this study points to considerable differences in the prospects for development in each country - prospects which, in some cases, fall short of the expected growth and progress.

The rapid rate at which the emerging economies of Brazil, Russia, India, China and South Africa have in recent years been closing the gap with the developed world has been impressive. The popular BRICS acronym referring to these rising powers has in the last decade come to signify the major shifts underway in global economic and political relations. Yet those who assume that the patterns of growth observed in the last 20 years will continue unabated should bear in mind that the BRICS states face considerable obstacles to their individual paths of development. These obstacles include the threat of political and social instability arising from extreme social inequality and rampant corruption, as well as problems caused by an inadequate infrastructure unable to keep apace of the rapid economic growth seen in recent years. Further obstacles include massive environmental problems and the weight of demographic pressures on labor markets and education and social welfare systems.

Even if the BRICS manage to maintain their high rates of economic growth, this alone will not adequately equip them to meet the challenges ahead. Indeed, BRICS countries already marked by regional and social disparities will likely see problems associated with social inequality and environmental sustainability further exacerbated. Experience shows that only emerging powers, such as South Korea or Taiwan, that have made the right policy choices at the right stage in their economic development have managed to sustain solid growth without falling into the middle-income trap. Making good choices in this regard entails developing infrastructures, restructuring education, health care and innovation systems, as well as ensuring stable institutions and legal certainty. In fact, leaders exercising good governance use the dynamics of economic prosperity to advance the reforms underway in order to achieve sustainable growth with br
oad impact throughout society. However, the latest international research shows that this is precisely where more effective capacity in governance is needed.

How well do the political systems of the BRICS perform? Does each country have the institutional framework needed to advance its path of development and to effectively address needed reforms with sustainable solutions? What are the structural barriers to sustainable development within each political system? With the support of an international network of experts, the Bertelsmann Stiftung has conducted an indicator-based inventory of the state and performance of governance in each BRICS country. Focusing on 15 policy areas, including economic, labor, education, health care, social welfare, environmental and research and innovation policy, this study draws upon the analytic tool of the Sustainable Governance Indicators (SGI). This inventory allows for a systematic documentation of the need for reform in core policy areas. At the same time, the performance of each country’s system of governance, that is, the core executive and other policy stakeholders, is examined. In this way, the capacity for reform, or the extent to which individual political systems can not only identify problems, but also formulate and implement strategic solutions, is explored in each BRICS state.

Comparing each BRICS state to one another provides a profile of their individual strengths and weaknesses. This in turn yields insight into the factors driving success and the structural deficits in the political steering capabilities of each state. If we then link up in a comparative assessment the findings for reform need and reform capacity, we see considerable differences in each country’s prospects for development – prospects that in some cases do not match the widespread rhetoric of growth and progress ahead. What are the development prospects for each BRICS country and how do they co
mpare in terms of the SGI findings?

Russia is the poorest performer within the BRICS group, with the government showing significant weaknesses in the area of steering capability. The country lags in terms of central-government strategic planning capacity, effective interministerial coordination and implementation capacity. Given the prevalence of political patronage and clientelism, the lack of involvement of independent experts and other stakeholders, and frequent contradiction in the communication of policies, forward-looking policymaking in the sense of sustainable government is practically impossible in today’s Russia. Even the medium term holds little hope of improvement, as the Russian Federation is also the worst performer in the “organizational reform capacity” criterion, which examines institutional self-monitoring and reform capabilities. In comparing structures for the involvement and participation of civil society, only China fares worse.

India – Immense problems, but a distinct national-level capacity for reform

India’s prospects are considerably more promising. The country’s economic outlook is positive thanks to its favorable demographic development. However, the SGI experts warn that optimistic growth projections are dependent on the subcontinent’s ability to overcome enormous social and regional disparities, modernize its infrastructure and make further progress in combating poverty through reforms in the education and health care sectors. At least at the national level, the SGI experts assess India’s central-government steering capability positively. The country’s top ranking on the criterion of strategic capacity can be explained in large part by the strategic role played by the cabinet, the technical expertise and strong coordinating function of
the Prime Minister’s Office, an active exchange between scholars and the government, and consultation with societal groups that is to some extent institutionalized for important policy proposals. The subcontinent’s government has also demonstrated tangible progress in terms of how effectively policies are implemented, although, as in China, there are significant regional disparities that require attention. In the area of governance, it is particularly important that the government do more to battle the country’s rampant corruption by strengthening oversight mechanisms.

China – Continuation of growth is linked to far-reaching reforms

China’s classification, in comparison with the other BRICS, is somewhat ambivalent. On the one hand, the SGI experts note that it harbors considerable unexploited potential and has already made strategic decisions in its economic policy. However, China’s continued economic growth is predicated on far-reaching reforms being taken in key policy areas as well as within the institutions and system of governance itself. In fact, China’s political and social stability is put at particular risk by the country’s high level of social inequality, demographic development, growing environmental problems, an emerging real estate bubble, corruption and a lack of legal certainty. Experts also say the state-controlled financial system is in great need of reform. It is by no means clear whether China over time will be in a position to apply sound long-term solutions to the problems outlined above, as the country’s performance in the area of governance structures shows substantial variance as compared to the other BRICS.

The country stands out for its long-term strategic policy planning, and its hierarchical system of interministerial coordination also functions comparatively effectively. However, it is questionable to what extent the go
vernment actually does consult with independent academic sources. Like India, China’s multilevel political system shows strong regional differences in governance quality, which in turn has a negative effect on the quality of public services in peripheral areas. In the fight against corruption, China lacks both a free media system and a civil society sector independent of the state. The question for the future will be whether China’s leadership can retain the adaptability it has shown in recent years and – with an eye to the rapidly closing demographic window – commit to the necessary reforms. Opposition and power struggles by influential interest groups within the Communist Party of China (CPC) have to date prevented a reversal of these negative trends.

South Africa ranks in the middle of the BRICS group in terms of governance capacities. However, properly interpreting this position requires a closer look, as the middling score conceals a tension between the individual research dimensions. On the one hand, a number of recent developments point to an improvement in reform capacity, though significant weaknesses remain. On the positive side, the government has recently made significant changes to its institutional arrangements, enhancing its strategic planning capacities. Academic expertise is used by the government, and civil society actors and interest groups are in general successfully involved in the policymaking process. However, the South African government continues to show clear room for improvement in the areas of effective interministerial coordination, policy implementation and communication policy. In the key fields of education and labor market policy, South Africa still shows glaring weaknesses. The growth of political factions within the ANC and the significant levels of patronage, corruption and...