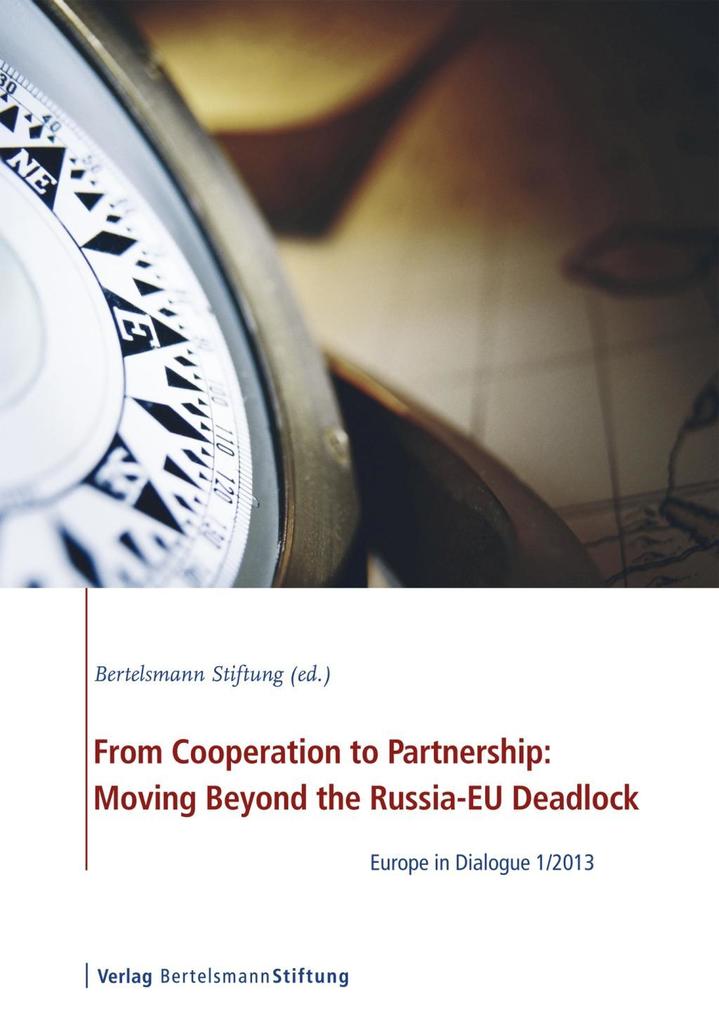 From Cooperation to Partnership: Moving Beyond the Russia-EU Deadlock

Titel: From Cooperation to Partnership: Moving Beyond the Russia-EU Deadlock

Europeans can be proud as they look back on fty years of peaceful integration. Nowadays many people worldwide see the European Union as a model of how states and their citizens can work together in peace and freedom. However, this achievement does not automatically mean that the EU has the ability to deal with the problems of the future in a rapidly changing world. The European Union must continue developing its unity in diversity dynamically, be it with regard to energy issues, the euro, climate change or new types of con ict. Indeed, self-assertion and solidarity are key to the debates shaping our future.
"Europe in Dialogue" wishes to make a contribution to these open debates. The analyses in this series subject political concepts, processes and institutions to critical scrutiny and suggest ways of reforming internal and external European policymaking so that it is t for the future. However, "Europe in Dialogue" is not merely trying to encourage an intra-European debate and makes a point of including authors from non-EU states. Looking at an issue from different angle or from afar creates a shift in perspective which, in turn, renders Europe's development more meaningful as it engages in critical dialogue with other societies.

EU-Russia Relations: A Partnership for Modernisation?

Modernisation is usually understood as a process in which a “traditional” vertically organised agrarian society is transformed into a “modern” horizontally organised and functionally differentiated capitalist one. First introduced by 20th century social scientists such as Max Weber and Talcott Parsons, this concept is modelled on the development of Western industrial democracies. In the Western discourse – though not only there – modernisation is considered inevitable if a state or society wants to survive in a competitive international environment. More recently, the notion of modernisation has become multifaceted. Modernisation discourses beyond Europe and the U.S. reflect an increasing diversity of imagined or actual development paths. This presents actors with different models of modernisation, no matter whether they are “Western” or “Eastern.”

Modernisation is also a key concept in EU-Russia relations. In this specific context, the EU is usually depicted as a prototype of “modernity” in that its organising principles are democracy and a market economy, and its societies are highly differentiated. Russia, on the other hand, is seen at best as a mix of pre-modern and modern elements, despite several waves of modernisation over the past centuries (Ledeneva 2013: 2). The modernisation of the Russian political system, economy and society has been at the core of the EU’s policy towards Russia ever since the collapse of the Soviet Union.

This article analyses the EU-Russia Partnership for Modernisation (known as P4M) launched in December 2010. A flagship of EU-Russia relations for a short time, the P4M has not lived up to the hopes and expectations that accompanied its inception. This chapter will l
ook at the emergence of the P4M, the different views of modernisation and the increasingly difficult political context on both the EU and Russian sides. The P4M is the most recent joint EU-Russia project, and its shortcomings and problems reflect the shortcomings and problems of EU-Russia relations on a more general level. The chapter will end with suggestions on whether and how EU policymakers could perhaps inject new life into the stagnating P4M.

The EU-Russia Partnership for Modernisation

The EU-Russia Partnership for Modernisation was a reaction to crises that erupted on two levels. On the bilateral level, both Moscow and Brussels were looking for an opportunity to set a more positive agenda after relations had hit rock bottom during and after the 2008 Russian-Georgian war. In Russia, President Dmitry Medvedev called for comprehensive political, societal and economic modernisation in the light of an economic crisis that once again revealed the weaknesses of the Russian economic and political system (Medvedev 2009).

After the year 2000, economic stabilisation based on energy export revenues eased the reform pressure on the Russian government (Sutela 2012). Increasing political centralisation and authoritarianism further undermined any serious proposals for reform. At the same time the improving fiscal situation enabled the ruling elite to offer Russian society an informal “social contract” which implied in so many words that a modest improvement in its socioeconomic situation was going to go hand in hand with political abstinence and acceptance of the rent-seeking strategies of the elite. The 2008 economic crisis put an end to this social contract, and modernisation became the buzzword of political debates in Russia.

Medvedev’s speeches and writings on modernisation and the ensuing debate among the Russian political elite and in Russian society wer
e greeted with relief in Brussels and capitals of the EU member states. In contrast to the 2008 European Security Treaty initiative, the quest for modernisation was seen as a genuine opportunity for cooperation and the transformation of Russia into a more democratic, prosperous and reliable partner. With this in mind, the EU and Russia launched their Partnership for Modernisation at the May 2010 summit in Rostov-on-Don. They identified 12 priority areas ranging from different aspects of economic and trade relations to social policy, the rule of law, the fight against corruption and civil society cooperation (Joint Statement 2010).

The objective of the P4M is to “promote harmonious economic relations between the parties based on the principles of market economy, and to provide an appropriate framework for the gradual integration between Russia and a wider area of cooperation in Europe” (Progress Report 2012: 1). The number of activities assigned to the P4M has grown since 2010 (Work Plan 2012), and projects now cover all areas of EU-Russia cooperation. Thus the EU has unilaterally committed €7 million to the Modernisation Partnership Facility. Moreover, the EU, EIB and EBRD signed a Memorandum of Understanding on the financing of P4M projects in December 2011. Negotiations on a unilateral Russian contribution to the funding of P4M activities are currently in progress (Progress Report 2012). The 2012 Progress Report (p. 12) also established a link between the EU-Russia P4M and the 23 bilateral modernisation partnerships between Russia and individual EU member states.

The P4M has evolved since 2010. However, it would also be true to say for several reasons that its contribution to the development of EU-Russia relations remains unclear. First, from the very beginning, the EU and Russia approached the P4M with different notions of modernisation. Brussels was thinking in terms of a wide range of political, economic
and social/societal changes that corresponded to the Western modernisation model as defined in the introduction to this chapter. Moscow, on the other hand, focused more narrowly on the economic aspects of the project. This discrepancy has become more pronounced over the past two years, and the Russian government has displayed an increasing unwillingness to embark on projects in the areas of the rule of law, good governance and civil society. It ties in with a change in the Russian debate after the 2011–2012 elections. The modernisation concept favoured by President Medvedev advocated a bottom-up process that actively involved individuals, societal organisations and business actors, and gave them greater powers in their dealings with the state. After Vladimir Putin’s return to the Kremlin, the term “modernisation” disappeared from the official discourse, and the Russian state once again became the key organising principle of Russian society. For this reason the gap between the EU’s concept of modernisation and the Russian official discourse on development has widened since 2011.

Secondly, the P4M overlaps with and indeed is embedded in existing EU-Russia structures (i.e., the Four Common Spaces, and EU-Russia dialogues and working groups), which makes it difficult to determine its exact added value. Like the roadmaps for the Four Common Spaces, the P4M is a non-legally binding arrangement that adds to the large number of EU-Russia interaction formats which do not oblige either of the two sides to implement them. The link between the EU-Russia P4M and the bilateral partnerships, which are of a different calibre, remains difficult to understand.

To put it in a nutshell, the P4M was an attempt to utilise the positive momentum of Medvedev’s modernisation debate and to achieve some progress despite the difficult and protracted post-PCA negotiations. To date, its contribution to the positive develo
pment of EU-Russia relations and the modernisation of Russia has been fairly modest.

There is reason to doubt whether Medvedev’s rhetoric was ever intended to be translated into action. However, it cannot be denied that it made it possible for a growing section of Russian society to express their discontent with the political system and elite. Since Vladimir Putin’s return to the Kremlin, the political leadership has been working to secure the support of the conservative sections of the electorate. Modernisation is no longer part of the official discourse, and it has not been replaced with a new and forward-looking strategy. As a result, the gap between the ruling elite and the potential pillars of modernisation in Russian society is growing, and the government is once again using repressive measures to prevent (and pre-empt) opposition activities.

Recent developments on the domestic front are reflected in the ongoing readjustment of Russia’s foreign policy. The temporary focus on partnership with Europe and improved relations with the U.S. has given way to a new wave of Eurasian integration (see the article by Zagorski in this volume). Moscow’s renewed ambition to create a pole of its own in Europe and the world does not simplify its relationship with the West (Sakwa 2012). And relations with the EU have been marred by renewed competition in the common neighbourhood, and the lack of progress on the post PCA-agreement. Russian-American relations suffered a number of serious setbacks during and after the presidential campaigns in both countries, and are recovering very slowly, if indeed they are recovering at all. Moscow, Washington and Brussels are increasingly at odds over developments on the domestic front in Russia, while Moscow fiercely rejects any kind of interference in its internal affairs.

However, Russia continues to... pan>