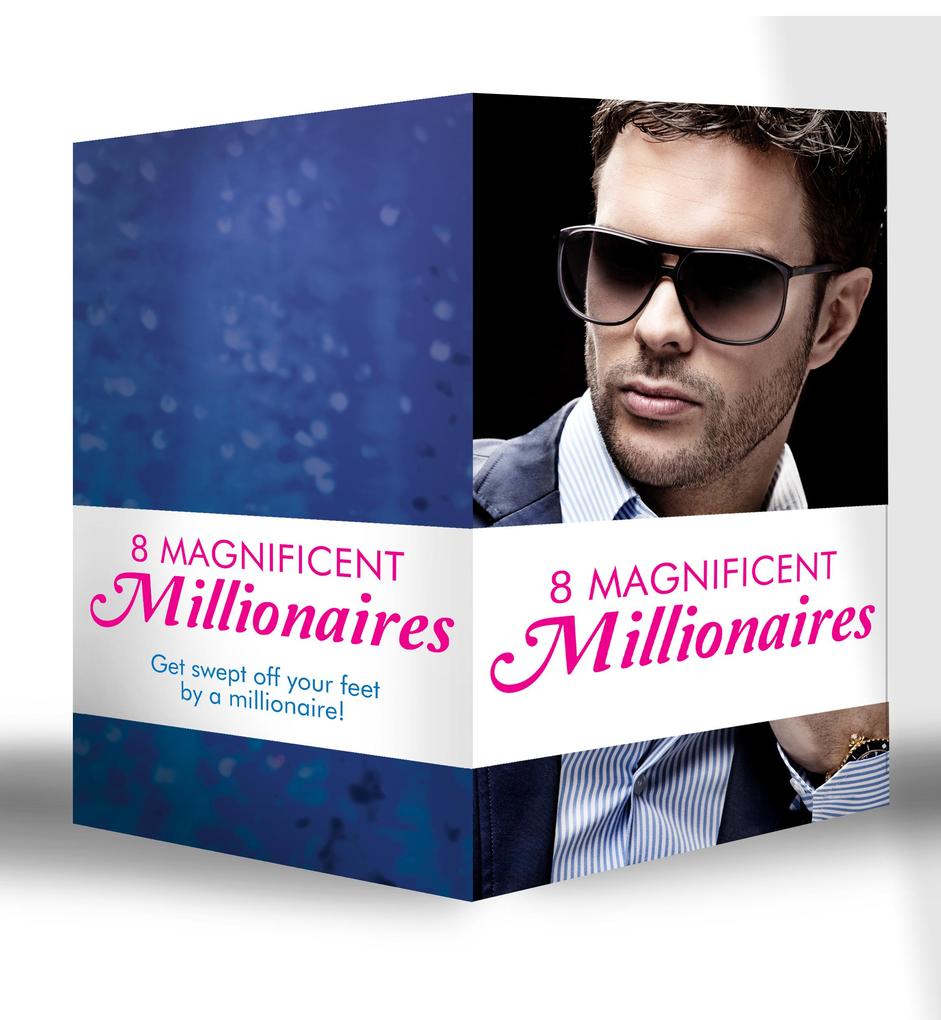 Eight rich men, all gorgeous, sexy and in need of a particular woman!

HIS LIVE-IN MISTRESS by Maggie Cox
Adrian Jacobs needs a live-in housekeeper. But pretty, cheerful Liadan Willow is not what he has in mind. She???s far too young and lovely to be at his beck and call???and to put up with his dark, brooding moments???

THE SPANISH BILLIONAIRE???S MISTRESS by Susan Stephens
Zoe and Rico Cortes are destined to clash ??? though she can't deny that he's the ultimate Latin lover. But Rico thinks Zoe's only being nice to gain access to his ancestral castle for her film about flamenco.

THE MILLIONAIRE???S RUNAWAY BRIDE by Catherine George
Moving home to the country offered Kate the chance to make a comfortable, secure life for herself. But there was a complication???her ex-fianc??, millionaire Jack Logan. He was still gorgeous???and the attraction between them was electric!

THE MILLIONAIRE???S SECRET MISTRESS by Kathryn Ross
Lucy has a strict rule about no office romances. That is, until she???s seduced by wealthy tycoon Rick, her new boss! And he???s gives her a new job title ??? Mum-To-Be!

MARRYING HER BILLIONAIRE BOSS by Myrna Mackenzie
Carson Banick: The black sheep of the family is back??? and now his family's future and fortune are in his hands. He must marry a suitable woman and provide an heir. Beth Krayton: Carson's feisty PA is determined to succeed on her own, without a man???. They shouldn't suit one another at all.

BILLIONAIRE ON HER DOORSTEP by Ally Blake
Billionaire Tom Campbell is content with the pace of life in pretty Sorrento, beachcombing and fishing in the deep blue sea. No complications. Then he walks up to the doorstep of Maggie Bryce's ramshackle mansion, and sees both are in need of some loving care.

WHAT THE MILLIONAIRE WANTS??? by Metsy Hingle
It was the ultimate gamble. Laura Spencer had bet herself against tycoon Jackson Hawk's plan to take over her New Orleans hotel. If she failed to raise fifteen million dollars within thirty days, Laura would soon find herself at Jack's mercy. And in his arms.

THE BILLIONAIRE BOSS???S BRIDE by Cathy Williams
Billionaire Curtis Diaz is determined to uncover why his new executive assistant, prim and proper Tessa Wilson, fuels his desire like no other woman. Is there life beneath her sensible, shapeless business suits? Can he unleash the sensual woman in her?

The day Maggie Cox saw the film version of Wuthering Heights, was the day she became hooked on romance. From that day onwards she spent a lot of time dreaming up her own romances,hoping that one day she might become published. Now that her dream is being realised, she wakes up every morning and counts her blessings. She is married to a gorgeous man, and is the mother of two wonderful sons. Her other passions in life - besides her family and reading/writing - are music and films.