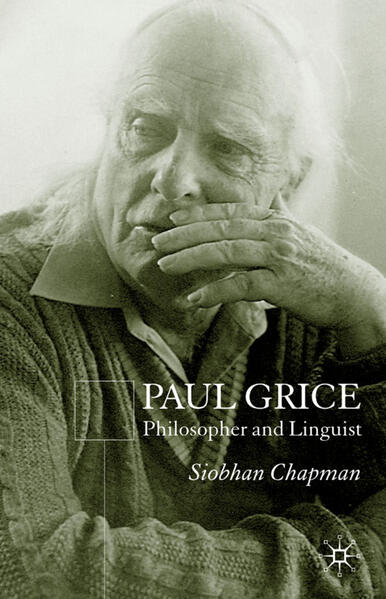 Paul Grice (1913-1988) is best known for his psychological account of meaning, and for his theory of conversational implicature, although these form only part of a large and diverse body of work. This is the first book to consider Grice's work as a whole. Drawing on the range of his published writing, and also on unpublished manuscripts, lectures and notes, Siobhan Chapman discusses the development of Grice's ideas and relates his work to the major events of his intellectual and professional life.

SIOBHAN CHAPMAN is Senior Lecturer in English language, University of Liverpool, UK. Her publications include Language and Empiricism - After the Vienna Circle (2008), Accent in Context (1998) and Philosophy for Linguists (2000).

'Chapman has performed a great service for us all by organizing and distilling Grice's numerous unpublished notes and unresolved collaborations.' - Christopher Potts, MIND

'...a very significant contribution to the expanding field of Gricean pragmatics (and its neo- and post-variants) for two reasons: it is the first book-length treatment of the whole of Grice's philosophy, including his work on ethics and rationality, and it is the first to make systematic use of the significant unpublished materials of the Grice archives. Let me state immediately that I believe the book is excellent...' - Journal of Pragmatics

'It is time linguists looked beyond 'Logic and conversation' and considered the whole of Grice's work in its philosophical context. Chapman's highly readable book enables them to do just that' - Bethan Davies, Department of Linguistics and Phonetics, University of Leeds, UK

'Grice himself was adamant about the unity of his thoughts, but it is sometimes hard to appreciate that unity because of the way he published (or in many cases, did not publish) his work. The author has done a great service to philosophers and linguists in bringing together all Grice's work. I particularly like the way she weaves together biographical material with intellectual endeavours. She successfully explains Grice-the-philosopher to linguists, and Grice-the-linguist to philosophers' - Anita Avramides, Lecturer in Philosophy and Fellow of St Hilda's College, Oxford, UK