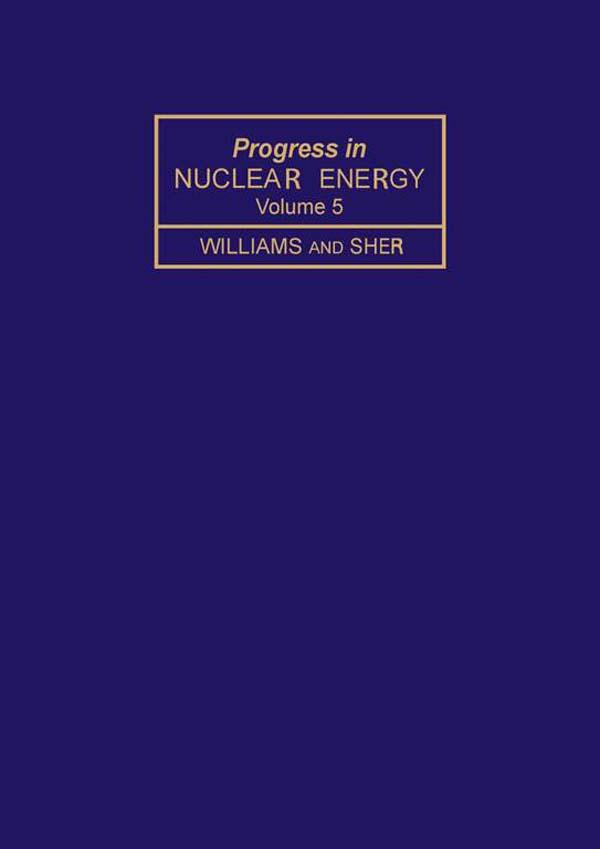 Progress in Nuclear Energy, Volume 5 covers the significant advances in several aspects of nuclear energy field. This book is composed six chapters that describe the progress in nuclear and gas-cooled reactors.

The introductory chapter deals with the development and evolution of decay heat estimates and decay heat Standards, and illustrates the use of these estimates through comparison of both the actinide and fission product decay heat levels from typical fuel samples in a variety of reactor systems. The succeeding chapters present different practical methods for handling resonance absorption problem in the case of thermal reactor lattices and review the physics of the different noise phenomena. These topics are followed by discussions of the developed methodology for the description of breeding, conversion, long-term fuel logistics, and related subjects derived from the detailed mathematical description of the fuel cycle. The concluding chapters consider the historical development of heat transfer surfaces for gas-cooled reactors. These chapters also provide a complete set of differential nuclear data on the three technologically important americium isotopes, 241Am, 242Am, and 243Am, suitable for incorporation into the computer-based U.K. Nuclear Data Library.

This book will prove useful to nuclear physicists and nuclear energy scientists and researchers.

4 THE EFFECT OF NEUTRON ABSORPTION IN FISSION PRODUCTS

The decay heat measurements discussed in the previous sections were, in general, made for relatively short irradiation times in low level neutron fluxes. Under these controlled experimental conditions the effect of neutron absorption in fission products was negligible, and could be thus excluded from the corresponding summation calculations. For typical reactor operating conditions, however, it is necessary to consider these effects—particularly at the longer cooling times.

As noted earlier, one of the first summation studies to include the effect of neutron absorption, and investigate its influence on decay heat predictions, was that of Perkins and King (1958), in which neutron capture in 135Xe was considered. In the cases studied by Perkins and King (1958) this effect was found to be negligible. As a result, it was some years before neutron absorption effects were studied again in detail, when England (1969) made a detailed study of different fissile nuclides under a variety of flux levels for irradiation times of 10,000 hr. The effects found by England (1969) were substantial, but were due almost entirely to the change in fission rate arising from the increased fuel depletion. The results were revised by Shure (1972), who concluded that, for a large range of reactor shutdown times (less than 107 sec), neutron absorption in fission products has only a small effect on the decay heat prediction.

The build-up of unstable nuclides from neutron absorption in long-lived and stable fission products results generally in a net increase in the decay heat level. There are, however, some neutron absorption reactions which produce a negative effect on decay heat. An important reaction falling into this category for thermal reactors is neutron capture in 135Xe, which produces stable 136Xe. Although the half life of 135Xe is 9.16 hr, its capture effect persists for much longer times. This arises because the neutron capture in 135Xe reduces the net accumulation of its daughter product 135Cs, which, although stable, transforms via neutron capture to 136Cs—a radioactive nuclide with a half-life of 13 days.

One of the most detailed studies of neutron capture effects on decay heat was made by Tasaka (1977). Calculations were made both with and without neutron capture reactions for the irradiation of fuel from typical gas-cooled, light water and sodium-cooled fast-breeder reactors. The fission products which affected the decay heat as a result of neutron absorption were listed by Tasaka (1977), together with their contributions to the total effect. As in the other studies, the effect on decay heat was found to be negligible for times < 104 sec. At the longer cooling times, when the effect becomes significant, it is due to a relatively small number of nuclides—particularly shielded nuclides such as 134Cs, 136Cs, 148mPm, 148Pm and 154Eu. Figures 48 and 49 illustrate the results obtained by Tasaka (1977). The effects on the decay heat from 235U and 239Pu were found by Tasaka (1977) to be similar in each of the thermal reactor systems studied. The neutron absorption effect on the decay heat in a fast reactor system was found to differ only slightly from the thermal reactor examples when typical flux levels were used for each reactor type. The pe
ak capture effects occurred at approximately the same cooling times (106 and 108 sec). However, the results of Tasaka (1977) differed considerably from those of Marr and Bunch (1971b) for the fast reactor at cooling times > 107 sec; this was attributed by Tasaka (1977) to differences in theoretically estimated cross-sections for some of the longer lived fission products.

Fig. 48 The influence of flux level on the neutron capture effect for the thermal fission of 235U in an LWR (Tasaka, 1977).

Fig. 49 The influence of irradiation time on the neutron capture effect for the thermal fission of 235U in an LWR (Tasaka, 1977).

Tasaka (1977) also investigated the effect of using different data libraries, flux levels and irradiation times. The major differences found with the various data libraries were due almost entirely to the differences in the value of the 133Cs neutron absorption cross-section.

Table 11 lists the nuclides important in the calculation of neutron absorption effects on the decay heat power from products of thermal fission (England et al., 1978). Reactions in which a very long-lived or stable nuclide transforms to a radioactive product will produce an increase in the decay heat level. Other reactions may produce both negative and positive effects, due to the depletion of the target nuclide and the build-up of the capture product respectively.

Nuclides important in the calculation of neutron absorption effects on the decay heat from products of thermal fission (England et al., 1978)

Although the influence of neutron absorption on fission product decay heat has been found to be small for short cooling times, some efforts have been made to model these effects for times < 104 sec. Shay (1976) presented a model for determining this effect from details of the burn-up and the irradiation and cooling times. Spinrad and Tripathi (1978) modified this representation to an equivalent form in which the reactor-dependent burn-up parameter was replaced by the number of fissions per initial fissile atom (FIFA). The model recommended by Spinrad and Tripathi (1978) is

where C is the percentage increase in decay heat, T is the irradiation time in sec, and t is the cooling time in sec.

It is suggested by Spinrad and Tripathi (1978) that, although the capture effect is small, it is unidirectional for t < 104 sec, and should therefore be incorporated into any zero-capture best estimate of decay heat.

For longer cooling times, it is possible to calculate the effect of neutron absorption by considering only a few of the nuclides given i
n Table 11. Such an approach has been adopted by La Bauve et al. (1978) and La Bauve, England and Wilson (1979), who considered only the more important capture chains to supplement the decay heat results derived from their exponential fits.

In previous sections, the results of summation calculations for both actinides and fission products have been compared with corresponding experimental results, in order to examine qualitatively the reliability of present day summation methods. It is possible, in principle, to evaluate the uncertainty in decay heat predictions due to the uncertainties in data input to the summation code. The benefits of such analyses are two-fold. Firstly, the sensitivity studies are capable of identifying those areas of basic data which have the greatest impact on the accuracy of summation calculations and which should therefore have highest priority in future evaluation work. Secondly, an independent evaluation of the uncertainties in summation calculations permits one to assess the available experimental results, particularly from the point of view of systematic biases to which the measurements are susceptible. Irrespective of the reactor type or fission process under consideration, the radioactive decay data for both the actinides and fission products remain the same; only the yield data differ,

5.1 Uncertainties due to actinide nuclear data

There has been relatively little work done generally on the evaluation of actinide decay heat by either experimental or theoretical methods. Neither has there been any concerted attempt to assess the uncertainty in...