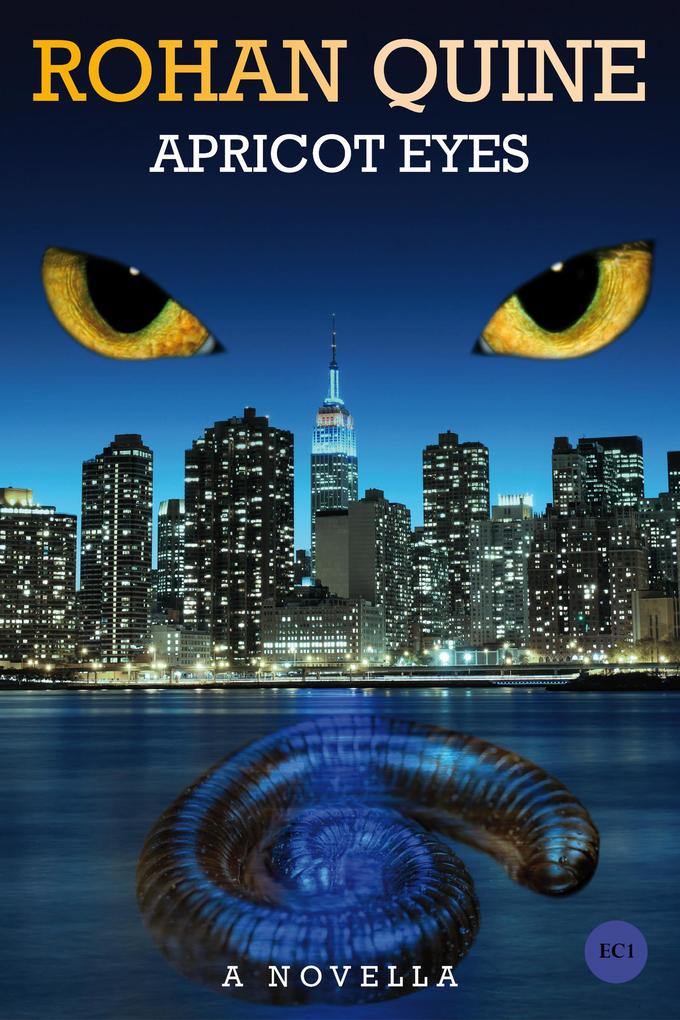 In Apricot Eyes by Rohan Quine, a cat-and-mouse pursuit through the New York City night involves a preacher, a psychic and a dominatrix, broadcast live on air - until a horror is unearthed, bringing two of them together and the third to a sticky end. Beneath a waterfront waste ground in the Bronx, a monstrous population is being fattened up, by the preacher, for malign purposes. Jaymi and Scorpio are on his tracks, however, in a blast of fun that trumpets boldness, tolerance and voltage, celebrating the mystery and dangers furled just behind the surface of the everyday. A Distinguished Favorite in the NYC Big Book Award 2021.

Having partially regained a power of second sight that he'd once possessed but lost, Jaymi Peek uses this ability in a live weekly television show online, where he channels onto the screen those unexpected places, hidden colours and hatching plans that he can perceive throughout New York City. He applies this sight to the task of relocating his old friend Scorpio, who has gone missing, but succeeds in catching only a glimpse of him in some unidentified corner of the city's underbelly.

Across a subway station, Jaymi notices an unwelcome visitor from his and Scorpio's past - Kev Banton, who has now become a prominent evangelical preacher intent upon a moral cleansing of the population. Jaymi tails Kev discreetly through the subway, and is surprised when Kev's journey ends at a waterfront waste ground in an industrial corner of the Bronx, where Kev slips out of sight amid an odd hum of underground engines...

The monstrous population beneath this waste ground, and the malign purposes for which the preacher and his wife have been feeding it, are revealed in the course of a triangular cat-and-mouse pursuit involving Jaymi, Scorpio and the preacher. This unfolds in Scorpio's physical pursuit of Kev through the crackle and night-pulse of the streets, from Times Square to the marginalised fringes of the city; in Jaymi's psychic pursuit of Scorpio, whether streaking up high through the skyscrapers' shine or secreted on a tanker as it rattles through the Bronx; and on screen, in the colourised shimmer of what Jaymi broadcasts live.

In its rollicking journey through these hidden planes of New York, to the simplicity and sensuality of its ending, Apricot Eyes is a blast of fun that trumpets boldness, tolerance and voltage, celebrating the mystery and dangers furled just behind the surface of the everyday.

Rohan Quine grew up in South London, spent a couple of years in L.A. and then a decade in New York, where he ran around excitably, saying a few well-chosen words in various feature films and TV shows (see www.rohanquine.com/those-new-york-nineties), such as "Zoolander", "Election", "Oz", "Third Watch", "100 Centre Street", "The Last Days of Disco", "The Basketball Diaries", "Spin City" and "Law & Order: Special Victims Unit".

He s now living back in East London, as an Imagination Thief. His novel "The Imagination Thief" is published in paperback, and also as an ebook containing hyperlinks to film and audio and photographic content in conjunction with the novel s text. See www.rohanquine.com/press-media/the-imagination-thief-reviews-media for interviews and some nice reviews in "The Guardian" and elsewhere.

Four novellas "The Platinum Raven", "The Host in the Attic", "Apricot Eyes" and "Hallucination in Hong Kong" are published as separate ebooks, and also as a single paperback "The Platinum Raven and other novellas". See www.rohanquine.com/press-media/the-novellas-reviews-media for interviews and reviews of these.

All five tales are literary fiction with a touch of magical realism and a dusting of horror. They aim to push imagination and language towards their extremes, so as to celebrate the beauty, darkness and mirth of this predicament called life, where we seem to have been dropped without sufficient consultation ahead of time. They may be read in any order.

His upcoming novel will be "The Beasts of Electra Drive", now barrelling down the pipeline

"The swooping eloquence of this book had me hypnotised. Quine leaps into pools of imagery, delighting in what words can do. The fact that the reader is lured into joining this kaleidoscopic, elemental ballet marks this out as something fresh and unusual. In addition to the language, two other elements make their mark. The seaside ghost town with echoes of the past and the absorbing, varied and rich cast of characters. It s a story with a concept, place and people you ll find hard to leave." JJ Marsh, "Book Muse"

"Quine is renowned for his rich, inventive and original prose, and he is skilled at blending contemporary and ancient icons and themes." Debbie Young, "Vine Leaves Literary Journal"