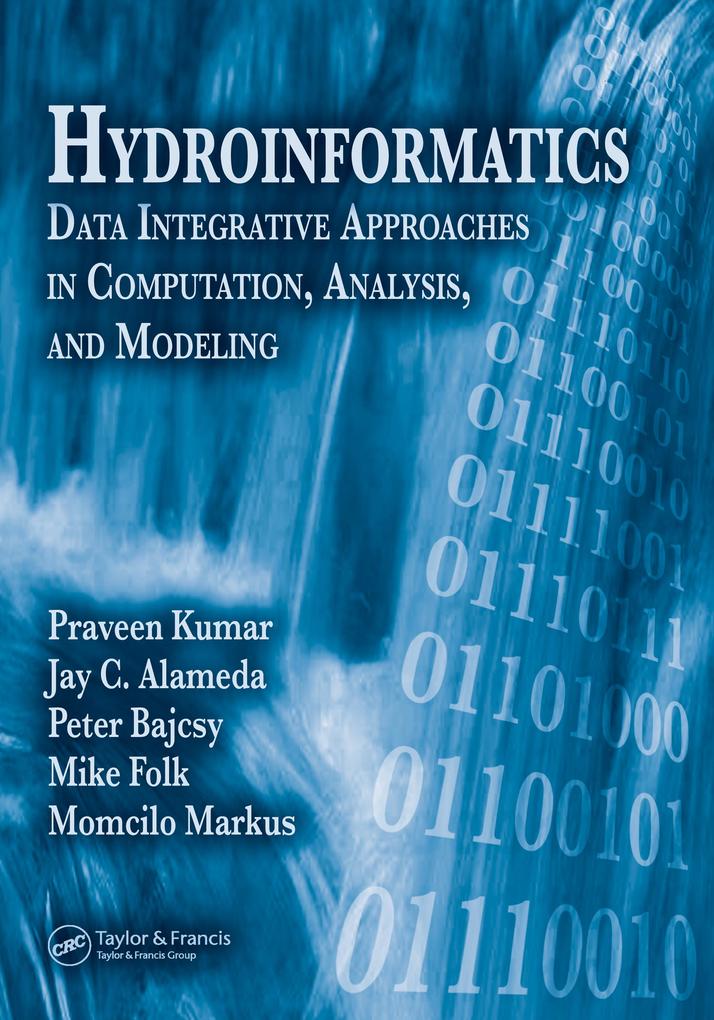 Taking an interdisciplinary approach, this book lays a pedagogical foundation in the concepts underlying developments in hydroinformatics. It begins with an introduction to data representation through Unified Modeling Language (UML), followed by digital libraries, metadata, the basics of data models, and Modelshed, the new hydrological data model. From this platform, the book discusses integrating and managing diverse data in large datasets, data communication issues such as XML and Grid computing, the basic principles of data processing and analysis including feature selection and spatial registration, and modern methods of soft computing such as neural networks and genetic algorithms.

Praveen Kumar, Ph.D. has been a faculty member in the Department of Civil and Environmental Engineering at the University of Illinois since 1995. Prior to joining the University of Illinois, he was a research scientist at the Universities Space Research Association (USRA) and Hydrologic Sciences Branch, NASA - Goddard Space Flight Center, Greenbelt, Massachusetts. His expertise is in large scale hydrologic processes with an emphasis on hydroclimatology, hydroecology, estimation and data assimilation, geomorphology, and hydro informatics. He obtained his Bachelor of Technology from the Indian Institute of Technology, Bombay (1987), Master of Science from the Iowa State University (1989), and Ph.D. from the University of Minnesota (1993), all in civil engineering.

Mike Folk, Ph.D. has been with the Hierarchical Data Format (HDF) Group at the National Center for Supercomputing Applications at the University of Illinois at Urbana-Champaign since 1988, leading the HDF group during that period. Dr. Folk's professional interests are primarily in the area of scientific data management. Through his work with HDF, Dr. Folk is heavily involved with data management issues in NASA andthe earth science community. He has also helped to lead the effort to provide a standard format to address data management needs for the Department of Energy's ASCI project, which involves data I/O, storage, and sharing among tera-scale computing platforms. Before joining NCSA, Dr. Folk taught computer science at the university level for 18 years. Among Dr. Folk's publications is the book File Structures, A Conceptual Toolkit. Dr. Folk earned his Ph.D. in computer science from Syracuse University in 1974, an M.A.T. in mathematics teaching from the University of Chicago in 1966, andB.S. in mathematics from the University of North Carolina, Chapel Hill, in 1964.

Jay C.Alameda has been with the National Center for Supercomputing Applications (NCSA) at the University of Illinois at Urbana-Champaign since 1990. Currently, Alameda is the lead for the NCSA effort in middleware, which encompasses grid computing environments for applications as well as gridd evelopment. In this role, he has worked to develop cyberinfrastructure in service of advanced environments for atmospheric discovery and advanced multiscale chemical engineering, in the form of configurable, reuseable workflow engines andclient-sid e tools andsupporting services. In developing these advanced environments, Alameda has worked with partners in the Alliance Expeditions (MEAD and Science Portals), and is now working with the Linked Environments for Atmospheric Discovery (LEAD) and Open Grid Computing Environments Consortium (OGCE) efforts. Through the course of developing application grid computing infrastructure, Alameda also works to ensure that NCSA and Tera Grid production resources are capable of supporting these new application use modalities. Alameda continues to cultivate collaborations with new discipline areas, such as the Consortium of Universities for the Advancement of Hydrologic Science, Inc. (CUAHSI), in order to help develop advanced capabilities to meet their scientific needs, and better inform the dev